We have owned a house in Nicaragua for almost 9 years but it’s only been about 9 days since we finally cracked the indecipherable mess that is our monthly electricity bill. Here’s the problem; every month your electricity shows up at your home (or doesn’t) covered in charges, subsidies, kilowatt readings and usage rates rounded to the nearest 100,000th of a cordoba ($0.0000003 USD). Since Disnorte-Dissur uses a sliding scale, all of these calculations are done multiple times and in a font so small you need a telescope to read them.

As soon as I start going cross-eyed I just give up and pay whatever number is in the bottom right corner never really understanding where it came from. Well my friends, that time is over. It took three relatively intelligent adults working in two languages over several frosty beverages to figure it all out but I think we have it. I think we finally understand our nicaraguan electricity bill.

General Breakdown of your Monthly Bill 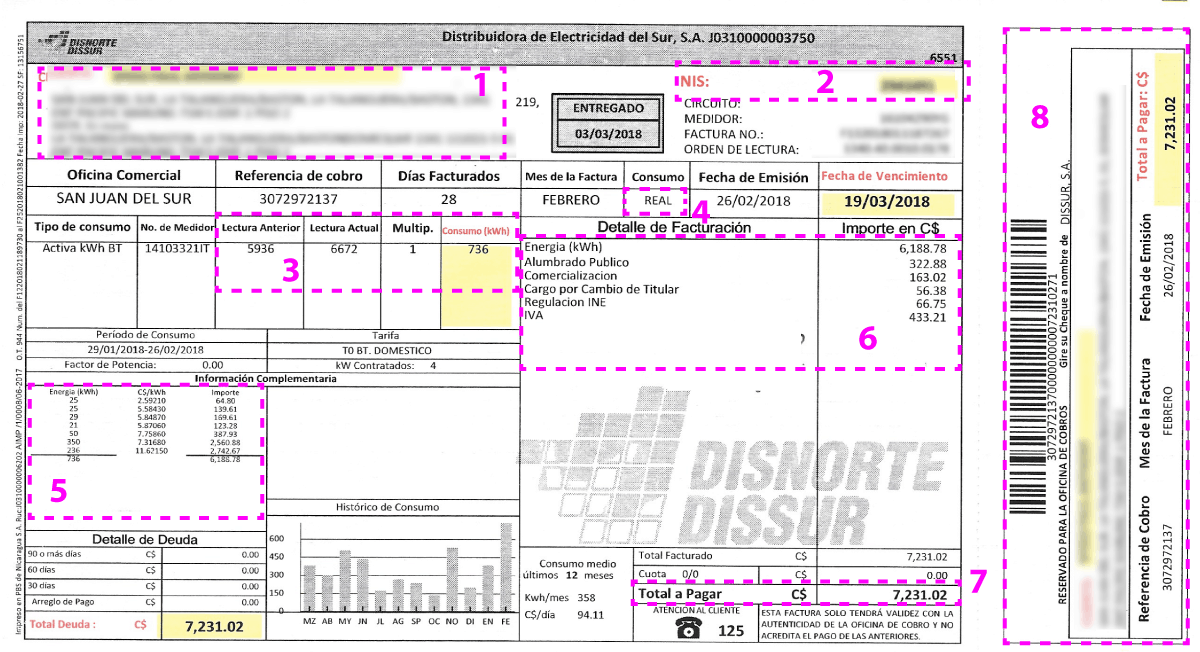 As you would expect, the amount you pay each month is a factor of how many kilowatt hours you use and the rate per kilowatt hour (kWh). The first part is pretty straight forward. The yellow box roughly in the middle of your bill that says “Consumo kWh” is the number of kilowatt hours you consumed over the corresponding billing period. It is a calculated value representing the difference between the previous meter reading (Lectura Anterior) and the current reading (Lectura Actual)…most of the time.

Sometimes, when they can’t make it out to read your meter in person, they just put an estimated value in there instead. This is presumably based on your usage the month before or maybe it’s the the number of bombas that went off last night. Who knows. Even if you don’t know where the estimated number comes from you can tell it’s an estimate because there will be a tiny letter “E” at the end of the number. 3783E for example. If you are lucky enough to get your bill delivered to your house they will write the word “Estimado” in the “Consumo” box on your bill. If you see either of these things on your bill it’s safe to assume that everything else on your bill is fiction. You need to go to the Disnorte-Dissur office and submit a “Reclamo” to contest the reading thus forcing them to come and actually look at your meter before they charge you. It’s actually less of a hassle than it sounds and it has always come out in our favour when it happens.

Assuming you don’t have any little “E’s” floating around on your bill, your next stop should be the section entitled “Informacíon Complementaria”. This is where you’ll find the breakdown of how much you are charged per kilowatt hour at each level on their sliding scale.

The price per kilowatt is set by INE and increases depending on how much electricity you use. The first 25 kWh’s are charged at the base rate and the next 25 kWhs are charged at a higher rate etc. The next two levels are broken into groups of 50 kWhs each. The next 350 kWhs are more expensive again as are the 500 kWhs after that. There are rates levels even higher than 500 kWhs but you get the picture.

The part that took us a while to figure out was why some rates levels would be split into two line items. For example, in the image above, the first 50 kWh usage level is split into two lines. The first 29 kWhs were charged at 5.84870 cordobas and the last 21 kWhs at 5.87060 cordobas (29 + 21 = 50). The reason of course is that INE changed the rate while you were using these 50 kilowatt hours of electricity so you have to be charged ever so slightly more for those last 21 kilowatt hours to compensate. It all makes perfect sense, right? It’s okay if your head hurts.

As an aside, a long, long time ago (a 30 second google search yielded no further details so I just moved on) all electricity in Nicaragua was controlled by the state run Instituto Nicaragűense de Energía (INE). The best I can tell is that sometime around 1994 this changed and now the private company Disnorte-Dissur is in charge. INE still regulates the power industry but it’s the sadistic weasels at Disnorte-Dissur who are responsible for all that tiny writing on our bills each month.

If you aren’t already curled up in the fetal position it’s time to talk about subsidies. If you are lucky enough to have used less than 150 kWhs in a billing period then there are a series of subsidies that kick in that put money back in your pocket. This means a discount of over 50% so it’s nothing to laugh at. We don’t see the word “subsidio” on our bills very often but, along with the sliding rates, it’s another way they make electricity more affordable for the people who use it the least. Makes sense to us.

There are two places where you can see these subsidies on your monthly electricity bill. The first is back in the “Informacíon Complementaria” section underneath the rate calculations by kWhr level. Basically they do all the calculations again with negative numbers so you can see how much of a discount you are receiving at each rate level. In the example below they received a discount of 482.80 cordobas which is the sum of all the numbers after the words “Subsidio consum”.

Final Summary and Other Fees

The final stop on your journey to understanding your electricity bill should be the section on the right of the bill entitled “Detalle de Facturación”. This is where the summaries of all the calculations are listed (Energia kWh) including any subsidies. There are also some other fees in there for things like public power cables (Albumbrado Publica), something called Comercializacion that I still don’t understand, a fee paid to the government as thanks for regulating the public power system (Regulacion INE) as well as our old friend IVA (taxes). Finally, down at the bottom you’ll find “Total a Pagar” that tells you how much you need to pay. 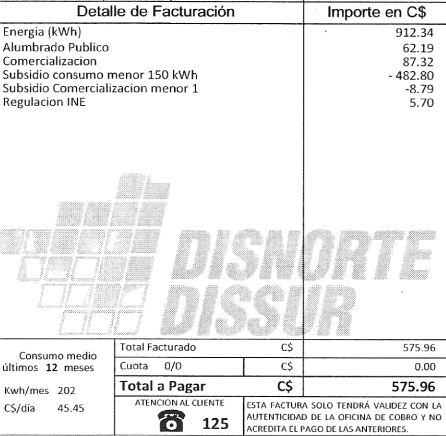 And that’s it. Now that you understand how it all works you are free to go back to just paying whatever number shows up in the bottom right hand corner of your bill. I know that’s what I’m going to do.